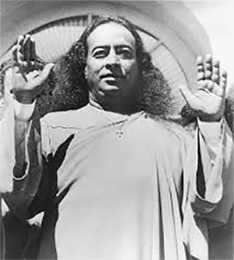 These are the excerpts from “Autobiography of a Yogi” by Sri Paramhansa Yogananda. In this book, Yoganandaji’s Guru, Swami Sri Yukteshwar Giriji expounds the following on Astrology:

“Astrology is never a question of belief; the only scientific attitude one can take on any subject is whether it is true. The law of gravitation worked as efficiently before Newton as after him. The cosmos would be fairly chaotic if its laws could not operate without the sanction of human belief.”

“Charlatans have brought the stellar science to its present state of disrepute. Astrology is too vast, both mathematically and philosophically, to be rightly grasped except by men of profound understanding. If ignoramuses misread the heavens, and see there a scrawl instead of a script, that is to be expected in this imperfect world. One should not dismiss the wisdom with the ‘wise.’

“All parts of creation are linked together and interchange their influences. The balanced rhythm of the universe is rooted in reciprocity,” my guru continued. “Man, in his human aspect, has to combat two sets of forces—first, the tumults within his being, caused by the admixture of earth, water, fire, air, and ethereal elements; second, the outer disintegrating powers of nature. So long as man struggles with his mortality, he is affected by the myriad mutations of heaven and earth.

“Astrology is the study of man’s response to planetary stimuli. The stars have no conscious benevolence or animosity; they merely send forth positive and negative radiations. Of themselves, these do not help or harm humanity, but offer a lawful channel for the outward operation of cause-effect equilibriums which each man has set into motion in the past.

“A child is born on that day and at that hour when the celestial rays are in mathematical harmony with his individual karma. His horoscope is a challenging portrait, revealing his unalterable past and its probable future results. But the natal chart can be rightly interpreted only by men of intuitive wisdom: these are few.

“It is only when a traveller has reached his goal that he is justified in discarding his maps. During the journey, he takes advantage of any convenient short cut. The ancient rishis discovered many ways to curtail the period of man’s exile in delusion. There are certain mechanical features in the law of karma which can be skilfully adjusted by the fingers of wisdom.

“Just as a house can be fitted with a copper rod to absorb the shock of lightning, so the bodily temple can be benefited by various protective measures. Ages ago our yogis discovered that pure metals emit an astral light which is powerfully counteractive to negative pulls of the planets.

“Our rishis found helpful not only a combination of metals, but also of plants and - most effective of all - faultless jewels of not less than two carats. The preventive uses of astrology have seldom been seriously studied outside of India. One little-known fact is that the proper jewels, metals, or plant preparations are valueless unless the required weight is secured, and unless these remedial agents are worn next to the skin.”