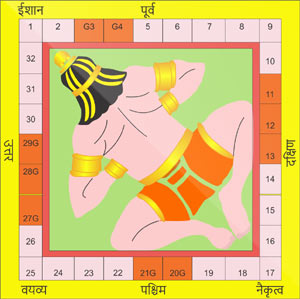 Vaastu Shastra (literally, science of dwelling) is a traditional Indian (Hindu) system of architecture, the principles of design, layout, measurements, ground preparation, space arrangement and spatial geometry. Vaastu Shastra is a part of Vedas. The Vedas are more than 5000 years old. The Science of Vaastu is found in the Sthapatya Veda which is a part of the Atharva Veda. However, Varahamihira’s Brihat Samhita, is the first known Indian text wherein the actual use of “Vaastupurusha Mandala” concept is mentioned for planning buildings, structures and cities.

A structure which encloses space is surcharged with the elemental forces. The material form or the condensed energies of these elements is the Vaastu. Any Vaastu is therefore, a dynamic live system with various interactive energies embedded in it. The centre is the pivotal point called as the “Brahmasthaan”, literally meaning the “The place of Brahma – the Creator”. This point corresponds to the “navel” of the “Vaastu Mahapurusha” of a Vaastu. The Science of Vaastu is related to vibrations, energies and resonance.

In a broader perspective Vaastu Shastra may be said to a philosophy of living for all round well being of humans. It is a comprehensive treatise covering not only the design and construction but also the flow of energies and different activities that need to be performed during the day in that Vaastu.

The Sanskrit word “Vaastu” means a dwelling or house with a corresponding plot of land. The underlying root is “Vaas" to “dwell, live, stay, reside". There is no equivalent word for “Shastra” in English. However, at best it may be translated as "scripture – a divine science on the art of structure and living in harmony”. Vaastu Shastra is an ancient and mystic Vedic Science of India. Today’s Vaastu Science or Vaastu Principles are all derived from Vaastu Shastra. Vaastu Shastra is a vast subject. By no means can it be said that one has complete knowledge on Vaastu Shastra.  It is just 20-25 years that Vaastu Shastra has gained so much importance, recognition and acceptance.

Our great Rishis and Sages explored and studied the secrets of the Cosmos. They realized the deepest secrets and fundamentals of existence. They knew that all that is material is made of five basic elements or “panch-tattwas” of the universe. They elucidated their findings covering the characteristics and impacts of Magnetic Fields, Gravitational Force, Solar Energy, Wind Energy and Cosmic Energies. These correspond to the panch tattwas or principles of Earth, Water, Fire, Air and Space (Ether).

All these scientific universal principles were used in ancient times and applied for designing the living or working place so that there is harmony and synchronization of the human and universal vibrations, leading to peace, contentment and happiness. Some of the points which are covered in Vaastu Shastra are different directions of a particular Vaastu, various zones, different activities performed in that Vaastu, the flow of cosmic energies, negative radiations from the earth and positive energies and negative radiations from the cosmos.

Param Shakti Healing uses the interdisciplinary sciences involved in Vaastu Shastra for dealing with Vaastu issues.  We take into consideration the positive forces as bestowed by nature, the universal elemental vibrations and various energy fields for overall wellness comprising of good health, harmonious relations, enhanced wealth and a positive outlook of life.


The Intriguing Story of Vaastu Purusha:

Lord Brahma the Creator materialized this Universe. He experimented with creating a special creature having special powers. This special creature called as the “cosmic man” was bestowed several “gunas” or powers. He started growing and over a period of time he became enormous. His appetite also increased and was constantly on the lookout for more and more food. His size became so large that his shadow cast a permanent eclipse on the earth.

There was panic and Gods rushed to Shiva as well as Vishnu for seeking a solution to this problem. Both Shiva and Vishnu said they were helpless. They told the Gods to go to Lord Brahma for solution. They approached Brahma in haste and pleaded him to stop this “cosmic man” from spreading havoc. Lord Brahma realized his mistake of giving the powers to his creation. He knew that it was not an easy task to overpower him. So, he directed the eight Gods who guard eight directions (Ashta Dikapalakas) for help. Immediately they swung into action. They grabbed the cosmic man and overpowered him. They pinned him on the ground with face down. His head was towards the North East direction and feet in the South West. Other Gods also helped and took position over his body. Brahma himself came down and put his weight in the centre of the body, which is the navel.

The cosmic man in agony cried out to Lord Brahma, “Why are you doing this to me?”, “You have only created me! Why this punishment? What’s my fault?  Lord Brahma replied “I am aware that it’s not your fault, but now you have become a threat to my creations on earth. I shall not destroy what I have created and hence you have to remain in this position forever.” “But what’s my benefit in all this?” the cosmic man asked.

Brahma said “I will make you immortal and all mortal people who build any sort of structure on earth will worship you. You can curse, devour and trouble these people if they don’t worship you and don’t keep you happy. You will be present in all the land and from now onwards you shall be known as “Vaastu Purusha”. Lord Brahma ordered the Gods who sat at key positions over his child, to safe guard and protect him from people.

Vaastu Purusha agreed to Lord Brahma and from then onwards he is an inseparable entity of any part of earth till eternity. Since then the worship of Vaastu Purusha has been in practice. It is mandatory to follow the Vaastu Shastra principles so as to make the Vaastu Purusha contented, comfortable and happy.

It is also believed that every piece of a land or a building has a soul of its own and that soul is known as Vaastu Purusha.

Some insight into the scientific implications of the Vaastu Purusha story:

The North East is the first interception point of the solar (electrical) energy from the Sun from East and the magnetic field of the earth. This electromagnetic point is the most positive entry for a Vaastu. It is called as “Ishaan disha”. Meaning the “direction (of entry) of the Lord” in the Vaastu.

The Ashta (eight) dikpalakas (guards) are the directions (which are located at the periphery) of the Vaastu while the navel or centre is the “brahmasthaan”.

The geometric pattern and the spatial energies created in a Vaastu are called as the Vaastu Purusha Mandala. Any plot or construction which has boundaries or walls therefore, by default, obeys the laws and principles as dictated by the Vaastu Purusha Mandala or the energy fields. That is, the people living and working in a particular Vaastu are subject to the energies present or missing.

Therefore, it is logical that when constructing a home or work place, the energies of the deity sitting on that part of the Vaastu Purusha Mandala should synchronize with the activity done in that part. When a construction is therefore, done as per the Vaastu Shastra, taking into account the various energies, their meaning and activities of the Vaastu Purusha Mandala, we see good health, peace and prosperity in the family or concerned persons living in that Vaastu.

Our life involves multi fold activities from early morning to sleeping time at night. During the day we perform various activities at different locations of the house or Vaastu. Due to the axial rotation of the earth the Sun’s rays keep changing over the day till sun set. The electrical field and energy levels change accordingly. Ancient seers gave due consideration to these points also when designing and constructing a place or Vaastu. These energy patterns were also a valuable part of the daily routine for the persons, like getting up early, taking bath at brahma-muhurta (when maximum pre-dawn sattvic healing energy is abundantly flowing), eating time, working time, rest periods etc. Timing for each activity and location for each activity was well elucidated in the olden times.

Param Shakti Healing recommends personal visit or on-site consultation to your Vaastu. At the end of the site visit, we give you solutions. We do Vaastu Consultancy and Vaastu Healing for all types of residential or home Vaastu as well as commercial or business Vaastu. We do Vaastu for good Health and stable progressive Career. For Vaastu Selection, Param Shakti Healing does a unique scientific test using your DNA (Aura) to find compatibility between your personal energy and the Vaastu energy.

Param Shakti Healing’s Vaastu Consultancy and Vaastu Healing have given relief and solutions to many clients for their different problems with a great degree of success.